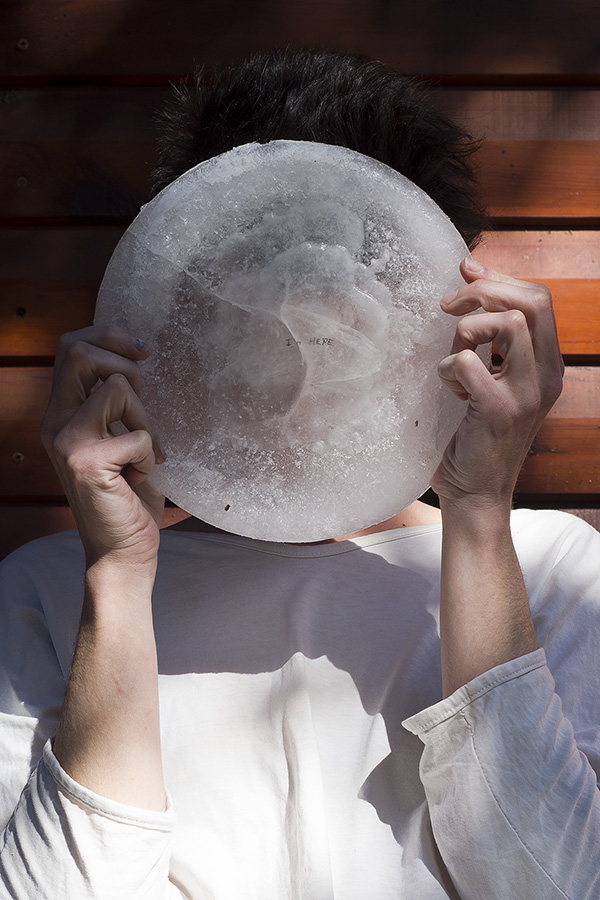 Is it possible for frozen rain to travel from Spain to Canada?

Yes, you are probably thinking that this question makes no sense, but…do you think, is it possible? Or not?

If I start with such a question it’s because I would like to talk about limits and possibilities. This text talks about my experience working with the artist Soufia Bensaid, first by distance through the mail and then later in person in two cities in Canada. The project was named CHARCO EXCHANGE and its aim is to research communication, using performance and live art as a tool.

The following lines describe and expose briefly some of the ideas and my reflections from the exchange process with Soufïa.

Firstly, it is a big challenge to work with someone you don’t know. In this situation, I always wonder, how to begin? Lets go back to the rain. During winter I collected some rain water from outside my home (I live in the country side). I froze this water and kept it until the spring. Combining the frozen block with more spring water, I inserted a little paper inside the block on which was written, “I am here”.

When the package arrived to Soufia’s home, the ice was melted. For me, this became a metaphor about communication and a way to begin the process of the project with her.

Back to the first question: is it possible for frozen rain to travel from Spain to Canada? It is possible for it to depart, but not possible for it to arrive. This mirrors the feeling I often have about communication: I send a certain message, but the way the other receives it…who knows?! This gap is both the possibility of language (and ourselves) and its limitation.

I believe that almost any question can be answered with a yes, no, or both. I like to see all the possibilities, like looking through a kaleidoscope, but of course without getting dizzy.

The beginning of the process started first with this action using the elements. Soufia’s responded with her reflection in words. The first words from Soufïa that inspired me were, “substantial link” and “water memory”. She asked me if I knew about water memory and no, I did not have previous knowledge of this, so I began to imagine memory as a river, a sea, a lake, a pond … I created a list with imaginary water words, like “all memory”, “a continuous flow memory”, and I created with them a video message*1 that I sent to her.

She answered this with her own memory list which included, “open memory”, “molecular memory”, “liberated memory” and she told me about a controversial theory developed by a research doctor which says that water keeps a trace/memory, at a vibrational level, of what it comes in contact with.

I made a second video message*2, which included her list and her response was,

“After seeing the clouds, was why not putting flowers, fruit, object in the pot of water? then thinking it as you did…because it had reminding me a speech of Thich Naht Than, a zen boudhist who was holding an orange and saying, this is not an orange, this is the insect who… the clouds who… the hands who… the earth who…”

I made a third video message*3 and I wrote to her, “This is not a stone, it ́s every place in which I had been, a piece of memory”.

These first exchanges took us a bit more than a month, and during that time I began to create an “object book” which I continued working on it while we were in Canada. Now that the project in Canada, I am finishing it back home. The process does not end just because we are no longer in the same city.

Once in Canada (first Montreal and later Toronto), I saw the work we were doing together as journeys: the first two days in dialogue with the space of the city, and later with deep conversations and proposals we made to each other. I called all this “Traces/Trayectos”. Here is a summary: 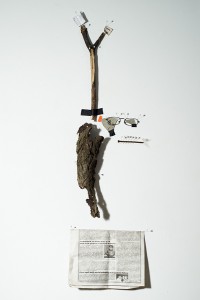 Second Trace:
South St. Laurent Street.
I continue collecting elements on the way and again at the end I collect water: “Water is communication”.
Action: I left a ring I found on my way, on a bench. Inside the ring (it was like a box), I left a little piece of paper in which I wrote, “I’m here”. 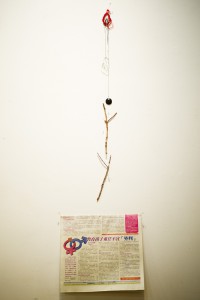 Third Trace:
Soufïa collects water from the mountain in her town. She tells me about identity using the water, and how with just one drop you can expand the identity (information) of one water, transferring it to someone else. This was really inspirig to me. It might be true, or not. We can choose believe it or not, but to me it’s just so nice to think about collecting water
from different places and distributing all of the water’s information around.

Fourth Trace:
Soufïa proposed to me that I pick a question from a list and record myself answering in my mother language. I proposed that she do the same. Through this action, we confronted the differences in the social and political meanings of the words we each use so often in our own languages.

I proposed to Soufïa to experience stillness together in the park. This is something I had being doing for long time, and she had also done the same in her own work. Communication through stillness in which appeared:
– The subtlety of the body

– Transformation of the face
– Disappearance of the lines
– Peripheral action: respect of the others

Sixth Trace:
Walking together around the city, deconstructed inside the gallery.
– Reading the city through the elements found on the way
– Object/ message/ trace
– Stopping it is to discover
– Create a piece as a dialogue, in which you don’t know how the other will answer you, but you are open to giving and receiving 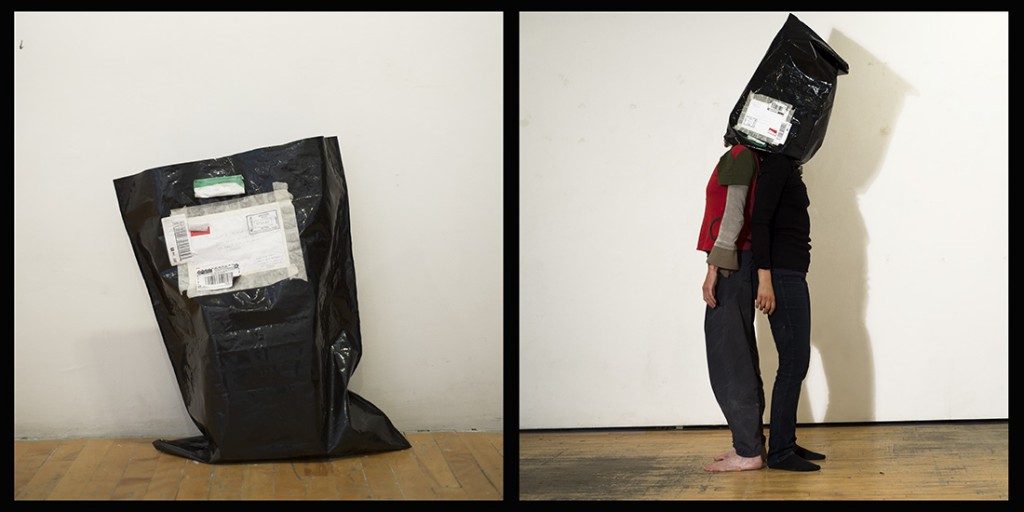 Seventh Trace:
Exchanging scores inside the gallery.
– The subjectivity of language
– Reading body language
Record at least one message for each trace.
Which is the starting point of our work for each of us? Soufïa: Try to be organic rather than mental.
Ana: First mental; later during the process, let things happen.

Eighth Trace:
Presence communication, or the communication of the presence. What are you engaged with in your work?
Soufïa: Universe.
Ana: life, society, politics, spirituality and myself.

Ninth Trace:
Conversation as a trace.
It is about where I am, and where I want to go.

Eleventh Trace:
Collective actions exchanged between the four participating artists in CHARCO.
I felt it was very difficult to work with the full group in this context. Perhaps one reason is that most of us normally work alone, and I prefer to talk with just one person rather than in groups. Also most of us don’t know each other and we were in a new city where we had much stimulus to filter.

Until this point, I have talked briefly about what appeared during each day, now I would like to talked a little bit about the two main aspects of the project: communication and scores.

As a group, we used the form of writing and following performance scores as a medium to begin the process of communication and conversation with the other artist, and a way to collaborate with each other.
About the scores:

– The score as a stimulus to other
– The “score” as a point to start, rather than an aim/goal
– Score/thought from somebody else; how to make have sense, how to feel it, to think it, to make it yours in a way that means something for both: the other and you.
– Make the score, tumble the score, apropartitura (sorry no translation for this)
– Score ≠ script
– Score = medium
– Score = idea
– Score = message
– Score = stimulus

Some words about the process and the communication:
– To encourage/ stimulate one to another
– To give and to receive and transform somehow each one in her/his own way but also let in the other infiltrate somehow
– It is connected thought, it is a continuous flow of thought
– It is something similar to adding ingredients to a stew
– Layers between one and the other. Sometimes these layers are transparent, other times opaque…

And finally, what was the most interesting to me?
– To get in touch with someone I don’t know on a very deep plane
– What I think about/wonder about my own work and even myself through this way of exchanging creative process and dialogue
– How the other makes the work in a different way and sometimes this is really confronting and some others really refreshing
– Interesting to experience how the other develops your idea
– To practice patience, openness and respect, all very useful in life.

*1 This first video message consisted of a still image in which you can see a fish tank, and inside it are papers with the words on them. The tank fills with water and empties out, repeatedly.

*2 Second video consisted also of a still image of the fish tank, but in this case I added the background of the cloudy sky, and through the tank we can see the road, inverted because of the water. My hand appears to introduce, one by one, each of the papers from Soufïa list, then I drank the water. When the tank is empty, I put it back

*3 Third video consisted of the same frame but this time instead of the papers, I introduce stones I had being collecting from a really long time ago. When the tank is full of stones, I drank the water.

Home » Textos » Is it possible for frozen rain to travel from Spain to Canada?Back to top